Although the length of the article might not suggest so, it did take some time to finally make it ready to publish. In the meantime, however, the notion of the article could be reconsidered all over again as the price, the element of most importance to the mainstream readers of this article, changed drastically, especially last week before publishing.

Indeed, we are talking about the most profitable investment at this moment, Bitcoin. Or shouldn’t it be phrased like that? I personally can’t answer that question given my limited knowledge on the core value drivers of the cryptocurrency, however, more surprisingly, the financial markets seem to pertinently differ from insights as well. On the one hand, you have the believers in Bitcoin who are completely fine with justifying the year-to-date rise of more than 700% as something that reflects the currency’s fundamental value. On the other hand, you have the Jamie Dimon’s (CEO of J.P. Morgan) and the Ray Dalio’s (CIO of Bridgewater Associates) of this era who called bitcoin a “fraud” or a “major bubble”. And if you are wondering why this might be relevant for you; last week I attended an interesting lecture in which the presenters of a paper asked a lecture room full of Financial Economics student what they thought about Bitcoin. Half of them raised their hand and supported Mr. Dimon in referring to it as a major bubble. One way or another, the more the price of the cryptocurrency trades at surges, the louder the debate grows around the persistence of its value. And you are right in the middle of it.

So, what can we expect in the upcoming period? Unfortunately, I cannot predict the future. Yet, the possible outcomes are very simple. If the believers are at the right end, we will probably end up with having a cryptocurrency accepted by every corner around the world, having lectures in blockchain in elementary school, and we will probably have to update Forbes 500 with early buyers of Bitcoin (so if you are a believer and you still do not have Bitcoins; grab your chance).

Otherwise, we might have a bubble, an investment mania where prices jump so high that no fundamental analysis can rightly justify the surge. The price gains, usually sharp and quickly, are typically followed by busts that tend to be just as severe. 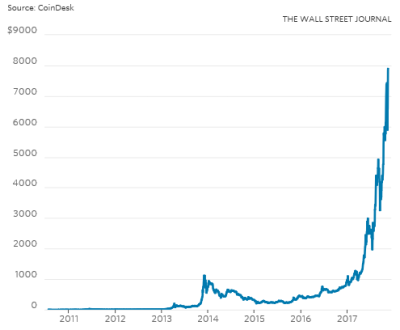 When the rise of the value of the cryptocurrency is compared with the dot.com bubble, for example, the effect of the surge in the relatively short time period is significantly larger than the markets saw back then. To give an impression of the damage in that bubble; in the span of fewer than 6 months, approximately 1 trillion in market value vanished. In today’s terms, that would be Apple and Facebook together disappearing completely. One could, of course, argue whether past bubbles are an indication for the future, however, the idea alone is at least horrifying.

To conclude, the topic “cryptocurrency” remains very interesting for the future yet it is not possible to reasonable say which front will triumph in the end. I can, however, say the following; for the believers - keep buying it. To those who prefer to align their thoughts with Mr. Dimon – don’t even think about it and enjoy your time watching the burst of the bubble.

Back to top
Cancel